We’ve peered into the terror of the most dangerous places to be during a major earthquake, but for most of us who live in earthquake country, the opposite question is much more relevant.

“Where is the safest place to be during a major earthquake?”

If you’re an American over a certain age, you’re familiar with the old advice to “stand in a doorway” during an earthquake. It turns out it’s bad advice, at least in our modern era. The conceit apparently grew from a 19th century photo of an adobe home with only the doorway standing.

Should you Stand in the Doorway?

Back in the 1800s, many homes in California were built with unreinforced adobe. That’s not true anymore, and in most buildings, the doorway is no sturdier than any other part of the house. Buildings are much less likely to completely collapse, even in developing countries, and the much bigger risk of injury is from broken glass, and flying or falling objects. In addition to possibly getting hit with objects while in a doorway, there’s also the very real possibility of being struck by a slamming or falling door.

That’s why official rescue teams in the U.S. and around the world recommend the Drop, Cover, and Hold On method of protection during an earthquake. Its simplicity is one reason for its effectiveness.

Drop, Cover, and Hold On in an Earthquake

First, DROP to your hands and knees. Getting down low prevents you from being knocked down, helps you crawl to safety as needed, and protects vital organs.

Next, COVER yourself with the sturdiest object available. If available, the safest place is under a strong table or desk. If no sturdy object is available, get next to an interior wall with no windows.

Finally, HOLD ON to your shelter if you have one, as the temblor will likely involve great shaking. If you have no shelter, protect your head by covering your neck and head with both arms and hands.

If you try to move during a major earthquake, it is very likely that you will be knocked to the ground, putting you at much greater risk of injury (another important reason not to run to a doorway).

The ONLY exception to the “Drop, Cover and Hold On” rule is if you are in a country with unengineered construction, and if you are on the ground floor of an unreinforced mud-brick (adobe) building, with a heavy ceiling. In that case, you should try to move quickly outside to an open space.

Even then, you still don’t want to stand in the doorway.

Safest Place to Be Outside

If you are outside during a major earthquake, quickly get to open space—move away from any large buildings, structures, trees, and vehicles. Despite movie portrayals of giant holes in the ground opening up during big earthquakes, it simply doesn’t happen. When in a tsunami zone during a large earthquake (often defined as 20 seconds of strong shaking), especially a beach or harbor, move to higher ground as soon as the shaking tops.

In a moving vehicle

If you are in a moving vehicle during a major earthquake, slowly head to the shoulder or curb and chose a spot to park that is away from utility poles, overhead wires, and under/overpasses. Set the parking brake and remain in the vehicle. Turn on the radio for emergency broadcasts. When the earthquake stops and you resume driving, watch out for hazards on the road created by the earthquake.

In a large venue

If you are in a large venue such as a stadium or theater remain in your seat and cover your head. Once the shaking is over, carefully walk out following emergency routes and watching out for debris or anything else that could have fallen during the earthquake.

It might seem anticlimactic to realize that the safest place to be during a major earthquake is wherever you happen to be when the shaking starts. On the other hand, it testifies to the power of preparedness. If you know  how to prepare for an earthquake, you know that you are as safe as you can possibly be during any earthquake, no matter where you are.

Get more information on Earthquake Preparedness.

Connected! You can switch to your editor 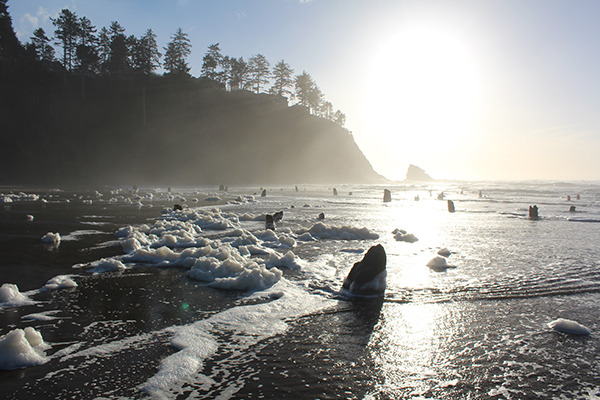