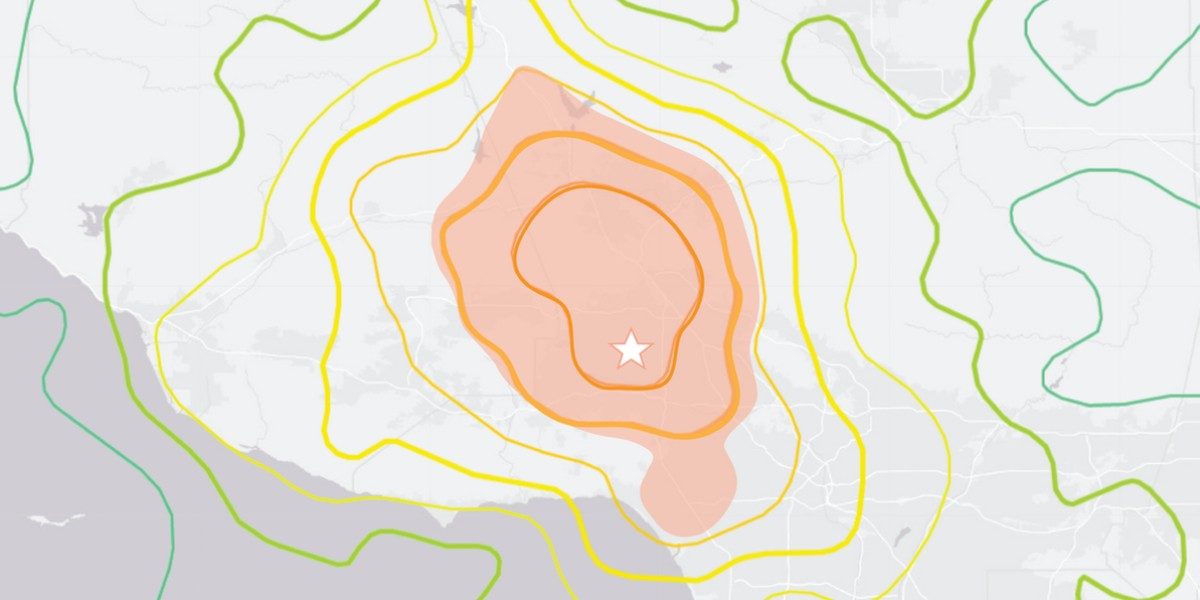 If you had Jumpstart earthquake insurance 40 years ago, when would you have received a payment? Over the last 40 years, 18 earthquakes would have triggered a Jumpstart payment in California.  In other words, Jumpstart makes payments on average four times per decade.

The earthquake payment zone boundary is created by any census block that experiences an earthquake with Peak Ground Velocity (PGV) of 30 centimeters per second (cm/s) or more. This is roughly equivalent to the “red zone” shown on a USGS ShakeMap, which you can see in the standard ShakeMap legend.

In general, an earthquake with a Richter 6.0 magnitude and above will trigger payment.  This is true for shallow earthquakes (depth of fewer than 70km), which is the norm in California.  For deeper earthquakes, it takes a larger Richter magnitude to create a triggering PGV of 30 cm/s.

While most triggering earthquakes are one-time events, earthquake clusters and aftershocks can cause overlapping zones and multiple payments. Let’s look at a unique case from Southern California.

Jumpstart covers up to two triggering events per year, not including aftershocks. Therefore, a customer in the overlapping zone affected by both the Thousand Palms and Landers quakes would have received two $10,000 payments, for a total of $20,000.

How does Jumpstart decide when customers get paid?

The process to determine the payment zone is fully transparent and accessible to the public.  You can follow the same steps as Jumpstart after any earthquake.

A USGS ShakeMap is used to establish the payment zone where the PGV is 30 centimeters per second (cm/s) and higher. Turn on the layers “Epicenter” and “ShakeMap PGV Contours.”  Then, observe the PGV 30 contour to see the payment zone. Below is an example ShakeMap for the 1994 Northridge Earthquake.

Here are more detailed instructions on how to look up PGV for any given earthquake.

The following earthquakes in California would have triggered a Jumpstart payment.

Have any questions about qualifying quakes or payments? Check out our FAQ page on claims/payment, the details contained in Jumpstart’s policy, or email us at info@jumpstartrecovery.com.