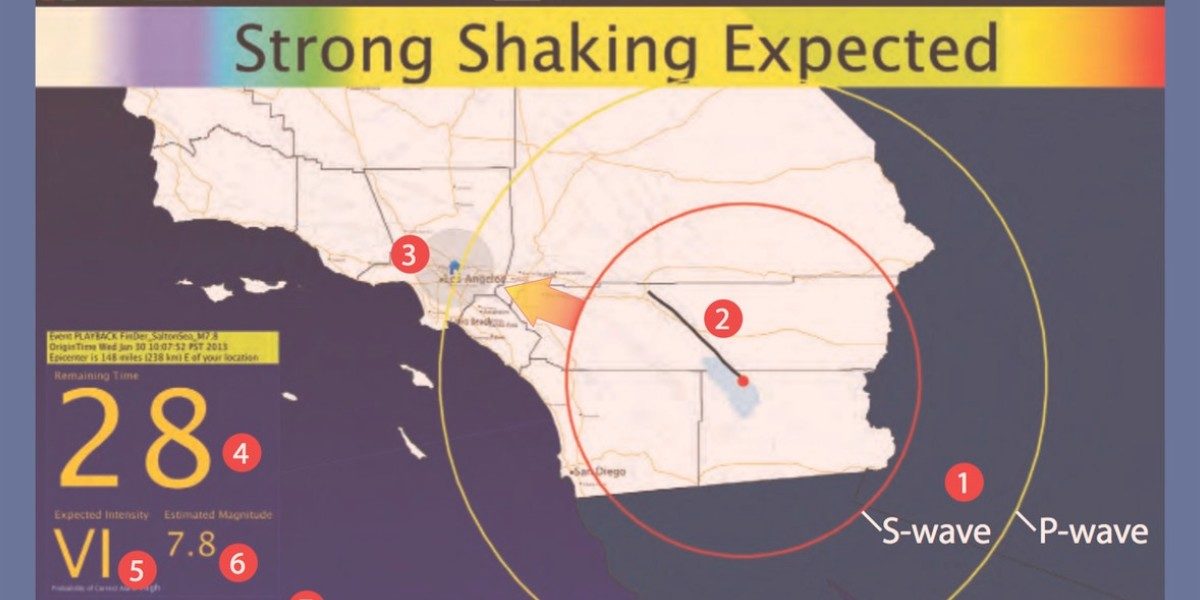 Can earthquakes be predicted? We get tornado warnings, hurricane warnings, snow storm warnings, but no earthquake warnings or earthquake prediction. Why is this? It’s difficult to prepare for something when we don’t know when it is coming. All we know is that eventually, the Big One will happen. Is new science making it possible to predict earthquakes?

Unlike the weather, earthquakes are impossible to predict in the short term. The earth’s crust is a complex system. It’s not possible to calculate the precise amount of energy build-up that causes an earthquake, nor how soon a fault will rupture. Scientists can only talk in broad probabilities: a 72% chance of a 6.7 magnitude earthquake in the next 30 years in the San Francisco Bay Area; a 60% chance of a 6.7, in the Los Angeles Area.

When an earthquake hits, it takes a few moments to realize what’s going on. A warning immediately before the earthquake would save time and allow you to take quick action before the shaking starts. This is soon to be a reality with USGS’s ShakeAlert system and Early Warning Lab’s new app called QuakeAlert.

ShakeAlert is a communication system that provides a few seconds’ notice before earthquake shaking begins. This is called earthquake early warning. While it’s not earthquake prediction per se, it’s a first step in that direction.

ShakeAlert consists of a network of seismic sensor stations and regional control centers on the West Coast of the US that detects the earthquake after it occurs and sends an imminent warning.

In order for the alert to be effective, it must arrive before the shaking starts. In other words, the speed of communication needs to “outrun” the propagation of earthquake waves. Therefore, time is of the essence for the system and the network. Many factors affect if you get a two-seconds warning or 20 seconds. Here are three of the most significant factors:

First, the location and depth of the earthquake. The farther and deeper the earthquake, the more warning time we get. Here’s why: Every earthquake produces two types of waves, primary waves (yellow in the animation below), and secondary waves (red in the animation below). Primary waves are pulses of pressure, and secondary waves are the back-and-forth motion that causes strong shaking. Primary waves travel faster than secondary waves, in the same way that lightning travels faster than thunder. The time between the two types of waves is dependent on the type of fault and depth of the epicenter. If the earthquake epicenter is at a greater depth, the longer the time lapse between the waves at the surface, just like the farther a storm, the longer the delay between lightning and thunder. The faster-traveling primary waves pull ahead of the secondary waves.

Second, the larger the network of seismic sensor stations, the sooner an earthquake can be detected. To optimize the density of stations, scientists aim for stations placed every six miles in a city, every 12 miles in areas of historical epicenters, and every 25 miles elsewhere. This is roughly 1,675 stations on the west coast. Right now there are 900 stations. As more stations come online, we will get more warning time.

Third, the seismic sensor stations that detect the primary waves send the information to the regional control center, where a program called Elarms quickly assesses that an earthquake occurred, where it occurred, the magnitude of the earthquake, and whether the system should send an alert. At least four sensors triggered by the primary waves are required to find the epicenter location, and the sensor needs at least four seconds of primary wave data to calculate the earthquake magnitude. As this software improves, the amount of warning time increases.

See below to see the system in action.

The Future of Earthquake Warnings

Earthquake warnings can do more than alert people through their phones. It can be used in many industries to shut down dangerous equipment. For example, alerting drivers through their vehicle to put on their emergency lights and pull over, slowing and stopping trains, placing construction equipment in safer positions, shutting down gas lines or nuclear reactors.

Want to be one of the first to get earthquake warnings in the US? If you live in Los Angeles County, download the ShakeAlertLA app here, and you’ll receive a warning before the next Magnitude 5.0 earthquake. If you live in California, Oregon, or Washington, Early Warning Labs will release their app this year. Sign up for beta access here.

Use those seconds wisely!